Learning’s local trips and extended travel opportunities are a superb way to get to know other community members through educational and fun activities.

Most local trips fill up fast, so sign up as soon as registration begins. Trips are available to adults ages 18+.

Trip fee includes transportation and admission ticket.  Tickets have been pre-purchased for events; therefore, they are non-transferable and non-refundable.

BROADWAY ACROSS AMERICA - MY FAIR LADY

Have you ever dreamt of stepping into a painting? Take an awe-inspiring journey into the incomparable universe of Van Gogh, one of the greatest artistic geniuses of the 19th century. Explore his life, his work, and his secrets as never before through cutting-edge 360-degree digital projections, a one-of-a-kind VR experience, and a uniquely atmospheric light and sound show. This impactful experience has already thrilled visitors in Naples, Italy, Brussels, Belgium, and the UK.  Become completely immersed in the works of art around you and feel the shift in reality as you dive into the world created by Van Gog’s brush strokes.”  A buy-your-own lunch will follow the tour.

THEATRE UNDER THE STARS (TUTS) - ROCK OF AGES

ROCK AND ROLL ALL NIGHT AT BROADWAY’S ULTIMATE ’80S PARTY! Rock of Ages takes you back to the time of bands with big egos, big guitar solos and even bigger hair! Featuring the music of hit bands including REO Speedwagon, Pat Benatar, Twisted Sister, Bon Jovi, Styx, and Journey, this musical comedy was nominated for five Tony Awards® including Best Musical.  Set at the end of the 1980s in one of the Sunset Strip’s last legendary venues, a place where superstar Stacee Jaxx takes the stage and groupies line up to turn their fantasies into reality. Amidst the madness, aspiring rock star — and resident toilet cleaner — Drew longs to take the stage as the next big thing. He falls for Sherri, a small-town girl, fresh off the bus from Kansas with stars in her eyes. But the rock and roll fairytale is about to end when developers sweep into town with plans to turn the fabled Strip into just another strip mall. Can Drew, Sherri, and the gang save the strip and themselves before it’s too late?” A buy-your-own dinner will precede the show.

Galveston’s Moody Mansion has been listed on the National Register of Historic Places by the U.S. Department of the Interior since 1994 and a Recorded Texas Historical Landmark since 1967. Take an exclusive behind-the-scenes 125th Anniversary tour with a knowledgeable docent guiding you through areas not normally open to the public, describing Mary Moody Northen’s vision for preserving her home and sharing her collections. Reservations will be held at a local Galveston restaurant so that students may buy lunch prior to the tour.

Filled with humor and tremendous heart, Sweat tells the story of three women who have spent their lives sharing drinks, secrets, and laughs while working together on the factory floor. But when layoffs and picket lines begin to chip away at their trust, they find themselves pitted against each other in a heart-wrenching fight to stay afloat. A buy-your-own dinner will precede the show.

Based on the hit film, Sister Act is the feel-good musical comedy smash that has audiences jumping to their feet! When disco diva, Deloris Van Cartier, witnesses a murder, she is put in protective custody in the one place the cops are sure she won’t be found: a convent! Disguised as a nun, she finds herself at odds with both the rigid lifestyle and uptight Mother Superior. Using her unique disco moves and singing talent to inspire the choir, Deloris breathes new life into the church and community but, in doing so, blows her cover. Soon, the gang is giving chase, only to find them up against Deloris and the power of her newly found sisterhood. A buy-your-own dinner will precede the show. Cost includes transportation and admission ticket.

It is “far and away the funniest musical of the season” (Daily News). It is “the most uproarious new show in years” (The Hollywood Reporter). It is “the best comedy on Broadway” (Forbes). No matter how you say it, TOOTSIE is unanimously funny! It is a laugh-out-loud love letter to the theatre, based on the Oscar®-nominated film. Featuring a Tony®-winning book by Robert Horn and an outrageously clever score by 2018 Tony® winner David Yazbek (The Band’s Visit, Dirty Rotten Scoundrels), this New York Times Critic’s Pick is a “hilarious, thoroughly modern TOOTSIE ” (People Magazine) that’s “even funnier than the movie!” (New York Post). “In these turbulent times, with the world out of balance, we need a place to let the good times roll,” says Rolling Stone, “TOOTSIE is it.” A buy-your-own dinner will precede the show. Cost includes transportation and admission ticket.

A highly inventive adaptation of the Dickens classic pared down to its essential elements. A resident company of actors assemble to perform a new production of the heartwarming Christmas story. When two of the troupe’s actors cannot arrive in time for the performance, others step in to create a magical world of holiday make-believe. It will be A Christmas Carol  like no other. A buy-your-own dinner will precede the show. Cost includes transportation and admission ticket.

Grab your travel friends and join us on these fantastic travel adventures! 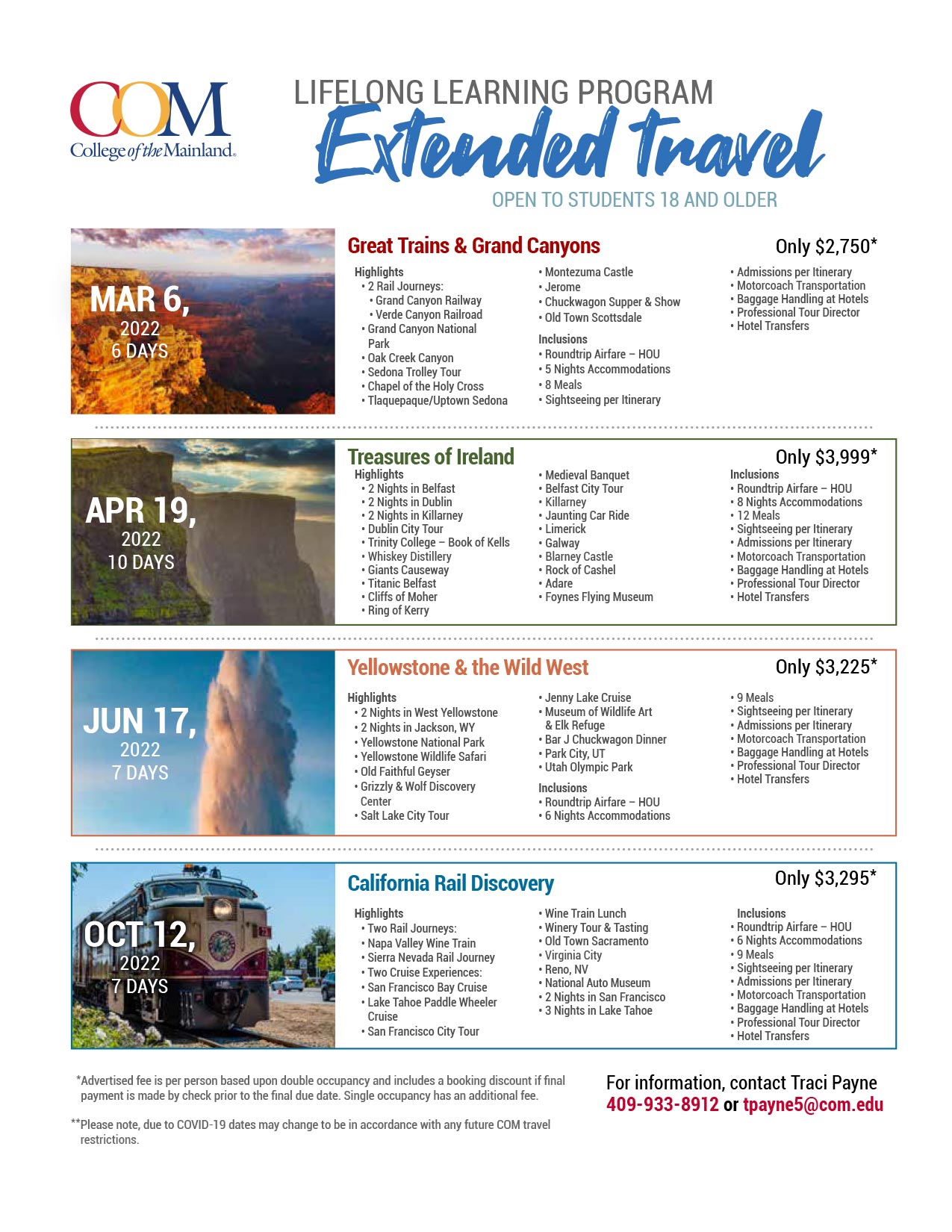 The College of the Mainland Lifelong Learning center is open to anyone age 18 and older, and located at 14057 Delaney, Gulfway Plaza. This 15,000-square foot facility houses 5 educational classrooms, a computer lab, a kiln room, a fitness room, and a dance studio.

The College of the Mainland Lifelong Learning Program’s mission is to provide educational opportunities for adult students by offering personal enrichment classes in a positive, accepting, and intergenerational environment.

Mark your calendar for these important Fall 2021 dates!

College of the Mainland Lifelong Learning